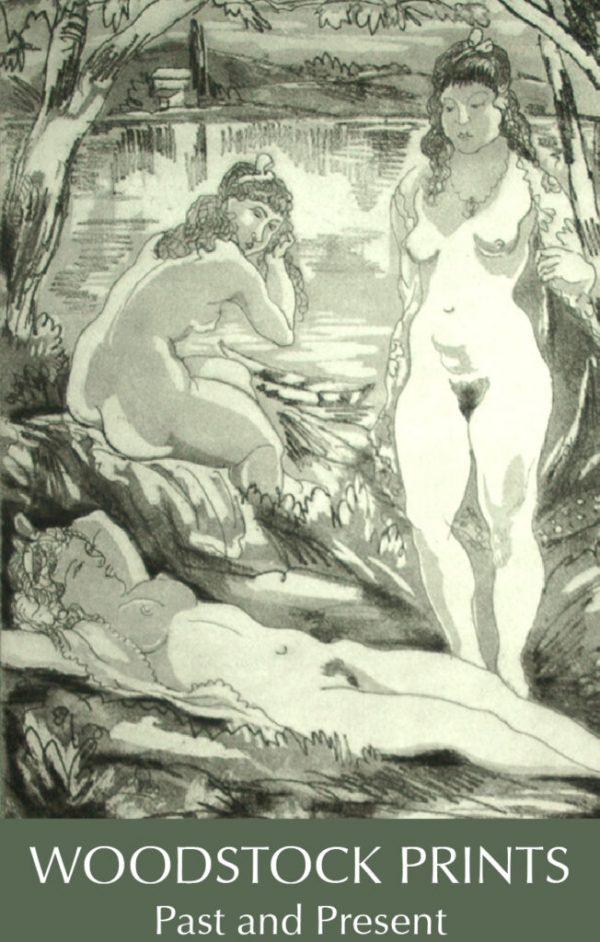 A SURVEY OF WOODSTOCK PRINTMAKING
CURATED BY RON NETSKY

Ron Netsky is Professor of Art and Chairman of the Art Department at Nazareth College in Rochester NY, where he teaches Printmaking.  His prints are included in the collections of the National Gallery of Art in Washington D.C., the Samuel Dorsky Museum of Art at SUNY New Paltz and other collections. He was co-curator of Leaving for the Country: George Bellows at Woodstock, an exhibition that originated at the Memorial Art Gallery in Rochester and traveled to the Terra Museum of American Art in Chicago and other museums.

He has also curated exhibitions on lithographers Bolton Brown, Harold Faye and others.

Choosing the work for a Woodstock printmaking show is not easy. So many great printmakers have lived and worked in Woodstock over the past century that I could have organized a strong show with a totally different list. Given our size limitations, I selected artists who devoted, or are devoting, a significant portion of their careers to printmaking, artists who were and are important to the Woodstock community and the art world, and artists whose work I love. These three things tended to overlap:

George Bellows (1882-1925)
One of the greatest of American artists, George Bellows painted primarily in Manhattan until 1920 when he began to spend long summers in Woodstock where he created expressionistic landscapes and allegorical portraits until his untimely death in 1925. Over 100 of his lithographs were printed by Woodstock artist colony co-founder and master lithographer Bolton Brown. His lithograph, Murder of Edith Cavell, depicting a nurse sentenced to death for helping allied soldiers escape, was part of the War Series Bellows created in response to the Bryce Report on German atrocities during World War I.

In terms of particular prints, some like George Bellows Murder of Edith Clavell, refer to the events of the time (in this case World War I). Others, like Ronau Woiceske’s Silver Light beautifully depict the Catskill Landscape. John Carroll’s Around The Table (Woodstock Artists)captures the spirit of the community among Woodstock artists. Karen Whitman and Richard Pantell’s New York City scenes remind us of all the Woodstock artists, past and present, who have divided their time between city and country. And Judy Pfaff and Donald Elder’s abstract works reflect the dynamism of contemporary expression.

Richard Pantell studied at the University of Bridgeport in Connecticut and The Art Students League of New York. His work is in the collections of the Newark Art Museum, The Museum of the City of New York, The British Museum, and the Jewish Museum in Stockholm, Sweden. He has won awards at The National Academy, Allied Artists of America, among others. Pantell has been teaching printmaking at The Art Students League since 1996.

One fascinating aspect of curating a Woodstock print exhibition is that you don’t have to make any effort to balance male and female artists. It may not be as surprising to find gender balance among contemporary artists, but, in Woodstock, female artists were prominent early in the 20th century when there was no such balance in the art world at large.

Lucile Blanch (1895-1981)
Painter and printmaker Lucille Blanch was born in Hawley, Minnesota and studied at the Minneapolis Art Institute and the Art Students League in New York City. She later taught at the League’s summer school in Woodstock. During the 1930s and 1940s, Blanch painted murals for Post Offices in Florida, Virginia, and other states under the Works Progress Administration’s Federal Art Project.

At the Bobino
lithograph
Courtesy Woodstock Artists Association and Museum

Another significant thing about Woodstock is how the present is tied to the past. I learned the lithography I teach today at the Woodstock School of Art by reading books on the subject by Bolton Brown and Adolf Dehn, two of the artists in this show. At the WSA we print on a Fuchs & Lang press just as they did. The Woodstock artist colony (Byrdcliffe) was originally founded as an Arts & Crafts colony in response to the dehumanization of the industrial revolution. In a way, that spirit continues; in an age when so much art is produced by digital means, many Woodstock artists still produce prints by hand.

Robert Angeloch (1922-2011)
While studying at the Art Students League in New York with Martin Lewis and Yasuo Kuniyoshi, Robert Angeloch won the McDowell Traveling Scholarship, enabling him to travel to France, Italy, England and Austria. During his long career, Angeloch had over 75 one-man shows. His works are included in the collections of the Metropolitan Museum, the Museum of Modern Art, the Library of Congress and many others.

Grant Arnold (1904-1989)
Grant Arnold was studying at the Art Students League in New York City when, in 1929, the school got a call from the Woodstock Artists Association asking if there might be a student who could print lithographs for artists in Woodstock. After an interview with Arnold Blanch at the WAA, he began to print stones on the Fuchs & Lang press in the basement of the building (now the Woodstock Artists Association and Museum).

Peggy Bacon (1895-1987)
From 1915 to 1920, Peggy Bacon studied at the Art Students League under George Bellows, John Sloan and Kenneth Hayes Miller. In 1919 she began to study at the League’s summer school in Woodstock. Few artists chronicled life in New York City (and Woodstock) in the first half of the 20th century with the wit and energy of Bacon.

Clarence Bolton (1893-1962)
Clarence Bolton came to Woodstock on a two-week vacation in 1917 and stayed for the rest of his life. After studying at the Yale School of Fine Arts, Bolton studied landscape painting with John F. Carlson. He began doing lithography as a result of his involvement with the Works Progress Administration’s Federal Art’s Project. Bolton was one of the first members of the Woodstock Artists Association.

Bolton Brown (1864-1936)
Mountain climber and artist Bolton Brown was sent by Ralph Whitehead from California in 1902 to find a site for an artist colony in the eastern United States. It was Brown who selected the site for Byrdcliffe and by extension the Woodstock artist colony that has grown over the past 110 years. Brown studied lithography in London and became a key figure in the revival of lithography as a fine art medium in the U.S., teaching many prominent artists in his Zena studio and printing over 100 lithographs for George Bellows.

Eduardo Chavez (1917-1995)
One of the most prominent mural artists of the Works Progress Administration’s Federal Art Project, Eduardo Chavez won a Fulbright Grant to travel and paint in Italy in 1948. He was an instructor at the Art Students League and, in 1968, joined Robert Angeloch, Franklin Alexander, Lon Clark and Wallace O. Jerominek in founding the Woodstock School of Art.

Emil Ganso (1895-1941)
Emil Ganso was born in Halberstadt, Germany, and, after immigrating to the United States at the age of 17, attended the National Academy of Design’s School of Fine Arts. Ganso spent summers at the artist colony in Woodstock, eventually offering his own summer classes. A master of all printmaking techniques, he produced over 400 prints in his short career. Ganso often painted and created prints depicting female nudes. In 1921 he was asked to withdraw a painting of three women from a show of the Society of Independent Artists’ exhibition at the Waldorf-Astoria Hotel in New York because it was deemed too shocking.

Marion Greenwood (1909-1970)
Born in Brooklyn, Marion Greenwood began studying with George Bridgman and John Sloan at the Art Students League at the age of 14. After vacationing in Mexico, she started painting murals there while still a teenager and, at the age of 23, became the first American woman to be commissioned by a foreign government to paint a mural. During World War II she worked as a war painter for the U.S. Army.

Rosella Hartman (1894-1984)
Rosella Hartman was born in Kansas in 1894. After studying at the Art Institute of Chicago she enrolled at the Art Students League in New York. While attending the League’s summer workshop in Woodstock, she met sculptor Paul Fiene who she married in 1923. Hartman lived in a cottage in the woods in close proximity to her favorite subjects, the wildlife of the Catskills.

Doris Lee (1905-1983)
Doris Lee was a painter and printmaker who rose to national fame when her painting, “Thanksgiving Dinner,” won the Logan Prize at the Art Institute of Chicago in 1935 and the award’s sponsor, Mrs. Logan, called the work “atrocious.” Lee was soon vindicated when she won a nationwide competition to paint murals for the Washington D.C. Post Office. In the mid-1940s Lee recorded her travels in Cuba and Mexico in a diary of paintings that were reproduced in Life magazine.

Kate McGloughlin teaches printmaking at the Woodstock School of Art where she started making prints in 1991 with Robert Angeloch. Her work has been exhibited and collected internationally. In recent years her prints have been included in exhibitions at the Herbert F. Johnson Museum of Art at Cornell University, the Samuel Dorsky Museum of Art at SUNY New Paltz, the Attleboro Arts Museum and The Schenectady Museum.

Paula Nelson studied at the Art Students League in New York and Woodstock, where she has made her home since 1966. She was Registrar of the League in Woodstock, and has been closely aligned with the Woodstock School of Art where she has served as Vice-president, Registrar, Director, President, and is currently Secretary.

Richard Segalman was born in 1934. He attended the Art Students League, the Parsons School of Design and the New School for Social Research. He also studied with Raphael Soyer and Stephen Greene. His work is included in the collections of the Hirshhorn Museum in Washington, D.C., the St. Louis Art Museum, the Museum of Fine Arts, Boston, and many others. Segalman teaches at the Woodstock School of Art.

Zulma Steele (1881-1979)
Arriving in 1903 as an early member of the Byrdcliffe Arts & Crafts colony, Zulma Steele designed furniture, books and “Zedware,” her own line of pottery. She was among the most prolific painters and printmakers in the early years of the Woodstock art colony and continued to work in Woodstock until 1967.

Nancy Summers is the daughter of two prominent Woodstock artists, Dudley Gloyne and Pauline Stone Summers, who studied with Philip Guston, Paul Fiene and Yasuo Kuniyoshi at the Art Students League and with Charles Rosen in Woodstock. Her work has been shown at the National Academy of Design, the Albany Institute, Florida State University and many other galleries.

Karen Whitman earned a Bachelor of Fine Arts degree in Printmaking from the State University of New York at Buffalo. She also studied at the Art Students League and Parsons School of Design. Her prints are in the collections of The British Museum in London, England; The New York Public Library; The Museum of the City of New York, and many others.