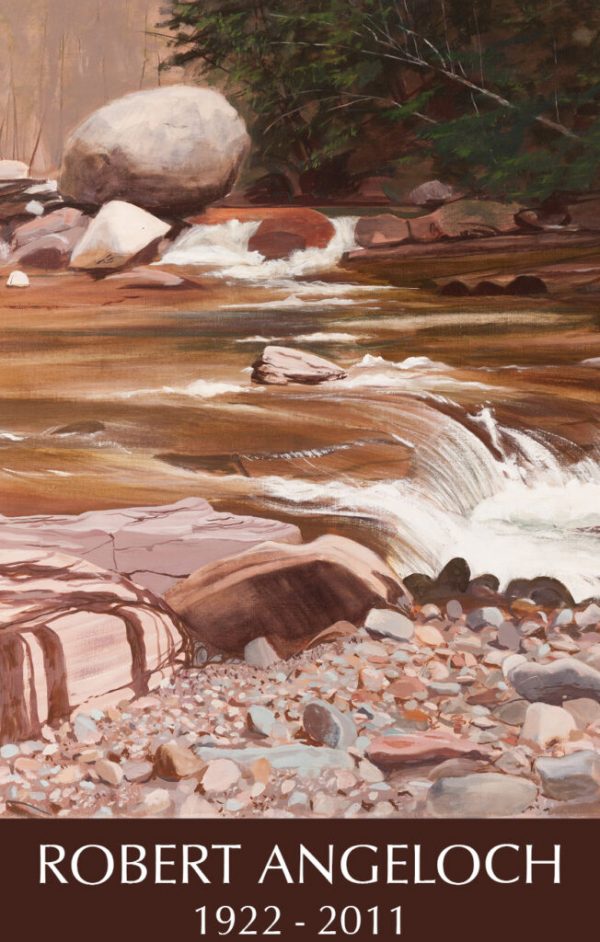 Angeloch received the McDowell Traveling Scholarship, Art Students League; Emily Lowe Award, Herminie Kleinert Award, Woodstock Foundation Award, Lentz Award, Academic Artists Association Award, Jurors Award of Merit, National Academy of Design; and the Kuniyoshi Fund Award. He won prizes from the Albany Institute of History and Art in 1955, 1957, 1961 and 1964; from the Berkshire Museum in 1957, 1961, and 1963; and Purchase Awards from Munson-Williams-Proctor Institute in 1957 and 1977. He was awarded the Woodstock Artists Association Purchase Prize, Peterson Prize from Allied Artists, 1st Prize from the Spring- field Museum and Grand Prize in the Ulster County Council for the Arts Landscape Exhibition. In 1971, 1976 and 1982 the Woodstock Artists Association commissioned Angeloch to produce its Annual Membership print. In 1974 he was the NEA Artist in Residence, Western Kentucky University. In 1995 he received the Pollack-Krasner Grant Award.

He created murals for the Board of Education, New York City, the Queensboro Public Library, Baisley Park NY, and the Kellogg Research and Development Center, New Brunswick NJ.

He was an Instructor at the Art Students League of New York Summer School from 1964-1979. He was a co- founder of the Woodstock School of Art and in addition to teaching there from 1968-1999, served as Director for three years and President for nineteen years. He served as Secretary, Vice-Chairman, Chairman and on the Board of Trustees of the Woodstock Artists Association. In 1975 he opened the Paradox Gallery in Woodstock which he operated until his retirement in 1999.

American Artist magazine profiled him in August 1969 and August 1985. He was the author of Basic Oil Paint- ing Techniques published by Pitman Press. His work was reproduced in Award Winning Paintings, Margaret Harold Publications; Creative Woodstock, Mead Mountain Press; Monhegan: The Artists’ Island, Down East Books; and Landscape: A Guide to Drawing and Painting Nature, Watson-Guptill. As the Phantom Press he published forty books of his own work in addition to several books on the work of other artists.

THE 54” x 72” PAINTING OVER THE FIREPLACE celebrates its twenty-fifth anniversary this year. It is the same age as this house. You hear people say, “Now, that’s a painting I can live with.” Having lived so much of my significant life within the purview of Robert Angeloch’s Summer Evening, which was painted for this house (the artist hung it himself), I’ve become accustomed to fantasizing what it’s like for paintings to live with people.

It’s a moon behind rolling clouds lighting up a field. In the foreground are weeds, lots of them. Bob loved weeds. He also loved moving shapes that defied him to capture them: water, clouds…seaweed. What did he say when he dined with us at the table in front of his painting? “Look at it! It’s so ALIVE.” But he was referring to the fire in the fire place below the painting.

I took two art courses with Bob. One summer day we went as a class to Yankeetown Pond, not to paint the famous view with the little white house in the distance. No, this first time we were to see what we could do with a closer view of spindly trees and some weeds and grasses reflected in the water. It was mostly browns and greens and whatever color the water was. I more or less went to pieces. It seemed a shame to mess up my pristine little canvas board. Others were stroking in shapes, laying in color. The hour was passing. The only way I could commit myself was to dribble some brown and then paint with my fingers until I had a muddy, ghostly scene with thin wavering stalks. I’ll spare you the rest of the details, but Angeloch’s response has stayed with me. I don’t remember his words and wouldn’t dare invent them, but he let me know it was perfectly appropriate to feel a respectful panic regarding the task at hand. I would venture to say he knew the feeling himself.

The later class was in a studio in winter and we were to paint a white bowl of lifelike wooden fruit set in front of a blue backdrop. There was a blushing peach, an orange, and a green apple. I was about to squeeze out my colors when Bob at his most crotchety loomed behind me and told me I would be painting this assignment in black and white.

He said I used color as a means of “guile and subterfuge” (his exact, unforgettable words) and he was hoping that limiting myself to black and white would teach me to look at what was actually in front of me.

Angeloch, who was a founder of the Woodstock School of Art, lived solidly within the atelier tradition: you learned your skills from other artists, practiced them according to your own vision, and passed them on to the next generation.

“Insistent” was how Henry James characterized the artist’s act of “throwing the whole weight of the mind” into what he was doing. Such an insistence was both instinctive and necessary, James said. It was possible for a practitioner (at the time James was writing about a sculptor) to live inside the ambience of art and pass for an artist. But the true artist felt ill at ease unless his spirit was “all there” as he worked. Nothing was “divided or dispersed.” (for more, see The Master, Leon Edel, p.158)

The first Angeloch work I ever brought home was an 18” x 24” painting of the Mohonk tower from a field in Kripplebush. Robert Starer and I had gone to the Paradox Gallery because I was looking for art that might be right for the jacket of my sixth novel, a bittersweet tale called The Finishing School, which was set in a country place shared a fascination for the mystical novels of Charles Williams and we both loved the nineteenth-century landscape painter Samuel Palmer. Bob would show me his own notebooks from recent trips to Yorkshire or Ireland or Monhegan, with their penciled landscapes and color notes for the paintings he was going to do. The little sketches already contained the Angeloch stamp of—I can only call it rapture.
The last time I visited Bob’s studio off Glasco Turnpike in 2003, I hoped to find in his racks a small Angeloch landscape to give as a wedding present. He plucked out the perfect thing, a 6” x 8” oil of a green Ohayo Mountain shimmering in summer sunshine. The wedding was still a couple of months away and it seemed a waste of rapture to leave the painting in its brown wrapping, especially since it was already framed, so I hung it in a place where I could see it. It’s overlooking a field and the Mohonk tower. Bob and Mara showed us some slides, and then suddenly there it was, both bitter- sweet and radiant. But, alas, a gallery owner in the west had just bought it and it had been shipped. But providentially the gallery owner agreed to take another Angeloch painting for his gallery and ship Kripplebush back to Woodstock if it was that important to me. (Yes, there are still such people in the world.) The painting can still be seen on the hardcover edition of The Finishing School and it looks over my left shoulder as I write this introduction in my upstairs study.
I have been its view for twenty-five years.