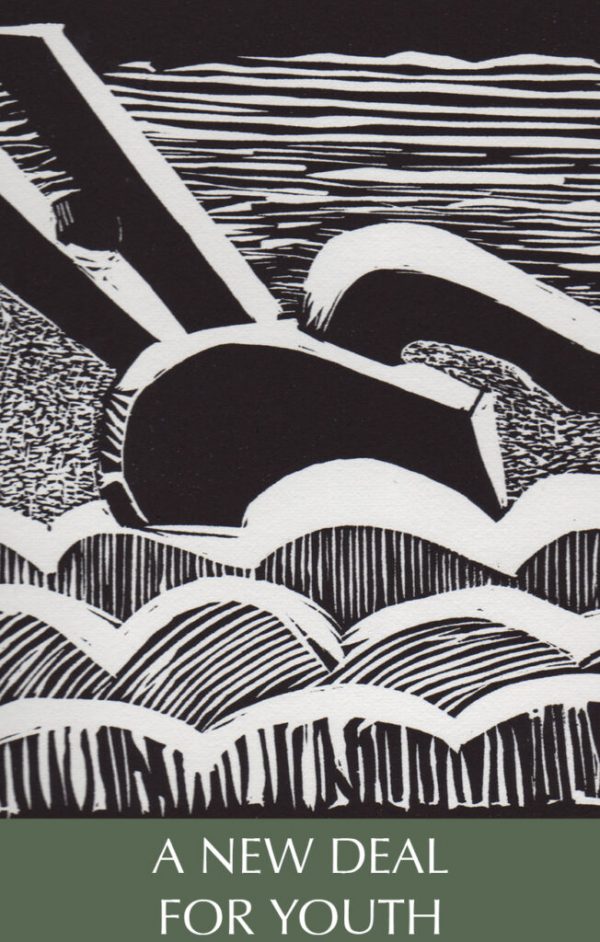 The native bluestone and timber buildings which house the Woodstock School of Art (WSA) had their auspicious beginnings in 1939 when they were commissioned to be constructed as a school for arts and crafts under FDR’s New Deal program, The National Youth Administration (NYA). From 1939 to 1942, at the Woodstock Resident Work Center (also known as the Woodstock Resident Craft Center), modeled after Eleanor Roosevelt’s Val-Kill Industries, young men and women, aged 16 to 24, received training in wood and metal working, wool production and weaving, blacksmithing, stone carving and pottery making. In an historical exhibit, co-sponsored by the National Parks Service’s (NPS) Roosevelt National Historic Site in Hyde Park, NY, the Woodstock School of Art will display examples of furniture, pewter, and weavings from the Park’s own collection of Val-Kill Industries pieces; photographs and historical documents from the WSA’s and Woodstock Historical Society’s collection; video recordings of the recollections of living descendants of some of the young people who attended the Crafts Center at Woodstock; and an education component prepared by Susanne Norris, NPS Education Coordinator at the Roosevelt Historic site.

Eleanor and Franklin Roosevelt strongly believed that practical training for young people to provide them with the skills for sustainability and independence in their life and work, especially in rural areas, could help to offset the devastating conditions caused by the Great Depression. In areas like upstate New York, farms were abandoned and a traditional way of life threatened as young people left to find employment in metropolitan areas to support themselves and their families. Both the First Lady and FDR wanted to encourage these young people to learn skills which could help them earn a living to supplement farm income during lean financial times.

In her 1949 memoir, This I Remember, referring to the establishment of Val Kill Industries, Mrs. Roosevelt wrote “My husband had very little interest in the production of furniture but he was greatly interested in finding some industry that could be developed in country areas such as ours, and that could perhaps furnish occupation for some of the younger men who would otherwise leave the farms. By giving them work in an industry which would yield them a fairly good income during the slack period on the farms, he thought one could keep the progressive, more active group of young people working steadily and so raise the standard of farm development in our area.”

Franklin had heard the story of a small community in Vermont where the people loved their homes and the countryside, but could not quite make a living on the farms. One enterprising citizen went away for a time and on his return suggested using certain kinds of wood which could be found in that neighborhood for some industry. They put up a small factory in which, during the winter months, they made wooden handles and wooden saucepan knobs, finding an outlet through one of the large manufacturers. By producing large quantities of the little wooden knobs and handles, they raised their standard of living and held on to the farms and homes they loved.

In 1926, Eleanor Roosevelt and her friends Nancy Cook and Marion Dickerman built a larger building near Stone Cottage at Hyde Park and the following year Val-Kill Industries began selling colonial-style furniture reproductions produced by Hyde Park workers and designed by Cook. Later, they would expand the business to include pewter (Val-Kill Forge) and weavings. They hoped the factory, a nonprofit entity, would not only provide jobs for rural workers who were unemployed or underemployed, but would also provide rural youth training for new kinds of work. Val-Kill Industries was in operation from 1927 through 1936.

Eleanor’s interest in handicraft and the ideology behind Val-Kill Industries developed into a political model that served as a prototype for the New Deal. Val-Kill Industries was created as an experiment dedicated to labor reform, social justice, and above all, promoting the economic and social welfare of American youth.

The National Youth Administration, under whose auspices the Woodstock Resident Work Center was developed, was an initiative of the Works Progress Administration (WPA) which was founded in 1935 by FDR to provide work for unemployed artists, craftsmen, and members of the trades. Woodstock was chosen to be the site of an NYA training facility because of the community’s reputation as a center for arts and crafts in America. The goals of the WPA and NYA were a natural evolution of the philosophy which informed the creation of Val-Kill Industries, and thus, Eleanor Roosevelt had great interest in the formation of the Woodstock Resident Craft Center. She was present at the dedication in 1939, and it has been said that she took personal interest in the students, even inviting them to swim in the family pool at Hyde Park.

While only a small number of artifacts actually produced at the Woodstock center can be located, the buildings themselves are the major attraction. Designed by local craftsmen, they were built in part by the young students themselves. Original iron hinges, made in the school’s forge and metalworking shop (today’s graphic and printmaking studio) grace cabinets in the office. The buildings’ unique, rustic styles were consciously designed in accordance with the local vernacular “arts and crafts” influence. The buildings housing the offices and gallery, studios 1 and 2, and studios 3 and 4, are listed on New York State and National Registers of Historic Places.

The Woodstock Resident Craft Center had a short life span. World War II intervened and its doors were closed in 1942. In 1947, the Art Students League of New York leased the property from its owners, the City of Kingston Water Department, and it served as home to their summer programs until 1979. In 1980, the buildings were leased by the fledging group of artist-instructors who had incorporated themselves as the not-for-profit Woodstock School of Art. In 1993 the WSA was able to purchase the entire 38 acre parcel and buildings from the water department. In the spirit of the original founders of the Woodstock Resident Craft Center, the WSA today provides tuition scholarships for area young people to pursue the study of fine art.

A New Deal for Youth: Eleanor Roosevelt, Val-Kill Industries and the Woodstock Resident Work Center was on view July 9-November 5, 2011. Read the NY Times article below.

Eleanor Roosevelt retreated from the chaos of politics and a difficult marriage to Val-Kill, a Dutch Colonial Revival cottage on the family estate in Hyde Park, N.Y. In the 1920s she converted its outbuildings into an idealistic factory called Val-Kill Industries.

She and a few female friends supervised workshops there for a dozen cabinetmakers, pewter smiths and weavers. The artisans also trained underemployed local farmers and their wives to earn extra money by producing handicrafts.

The company never managed to train enough apprentices to alleviate poverty around Hyde Park, and Mrs. Roosevelt closed it in 1936. But the furniture did end up in prominent politicians’ homes, including the White House. Franklin D. Roosevelt eventually adapted the Val-Kill concept for his federal stimulus programs aimed at preserving regional arts-and-crafts traditions.

“It’s not a stretch to say that Val-Kill Industries informed the New Deal,” said Frank Futral, a curator at Roosevelt-Vanderbilt National Historic Sites in Hyde Park, part of the National Park Service. He has helped organize a show on view through Nov. 5 at the Woodstock School of Art, “A New Deal For Toutj: Eleanor Roosevelt, Val-Kill Industries, and the Woodstock Resident Work Center”.

In Woodstock, N.Y., a short drive across the Hudson River from Val-Kill, Mrs. Roosevelt encouraged the government to build a bluestone campus for apprentice woodworkers, ironsmiths and weavers. The 1930s buildings, now home to the Woodstock School of Art, retain their hammered iron hinges. The current exhibition features artifacts from the looms, forges and lathes of teachers and students at Val-Kill and Woodstock.

In Hyde Park Mrs. Roosevelt eventually turned the Val-Kill Industries complex into her fulltime home, furnished mainly with the factory’s products. When John F. Kennedy visited her on the campaign trail, “the table they were having their tea on was a Val-Kill table,” Mr. Futral said.

The family largely emptied the house after Mrs. Roosevelt’s death, and the Park Service has been recreating her décor. It has borrowed a few pieces of Val-Kill Industries furniture from Richard R. Cain, a Florida collector whose grandparents worked for Mrs. Roosevelt.

A half-dozen Val-Kill wares are on view through Oct. 30 at the Museum of the City of New York in Manhattan in”The American Style: Colonial Revival and the Modern Metropolis”. In a year or so, partly with loans from Mr. Cain, Mr. Futral said that he planned to create Val-Kill Industries room settings in a fieldstone cottage alongside the former factory.