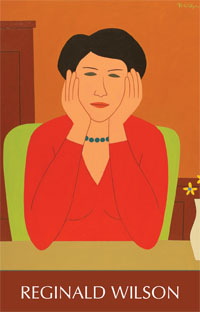 During the long days of the illness that preceded Reginald Wilson’s death in 1993, he and his wife decided that all of his work still in their possession should go to the Woodstock School of Art. The extraordinary gift, now in the school’s safekeeping, includes approximately 200 works of art, from which the present exhibition was selected.

Reginald Wilson was born in 1909 in the small town of Butler, Ohio. Determined from boyhood to be an artist, he arrived at the Art Students League of New York when he was twenty. He studied with John Stuart Currie, among others, meanwhile making a living with odd jobs like that of office boy or night watchman. He was an easel painter in the Federal Art Project and served for three years as an airplane mechanic in the US Army Air Force during World War II. He and the artist Carolyn Haeberlin were married in 1942, moving in 1945 to where they made their home in a 200-year-old farmhouse.

Wilson’s paintings and works in other media were exhibited widely beginning in the 1940s in New York City and in major museums and universities across the country. In Woodstock he showed at a number of galleries including that of the Woodstock Artists Association where he won the 1973 Sally Jacobs-Phoebe Towbin Award.