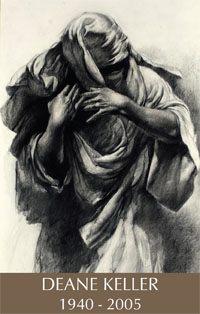 Deane Keller would pause after rubbing out a section of a demonstration drawing, hold up the blackened rag that was his eraser, and with a twinkle announce to the class assembled, “I have hundreds of drawings stored in this chamois.”

Legions of students knew him as a caring, passionate and beloved mentor during a teaching career that spanned more than forty years.

Deane was a “a man for all seasons” – artist, scholar, teacher, author, lecturer, and world explorer. An authority on the Greco—Roman Renaissance tradition, he was an ardent student of ancient cultures. He was particularly fascinated with the Middle East to which he and his wife, Dorothy, also a professor of art, made numerous trips.

Of his many honors, one he particularly cherished was the endowed Deane G. Keller Chair in Classical Drawing and Figurative Art, established in 2001 at Lyme Academy College of Fine Arts by Charlotte Danly Jackson, who had studied with him.

In addition to his vast production as an artist, one of his greatest legacies is the Draftsman’s Handbook: A Resource and Study Guide for Drawing from Life, which he wrote and illustrated and published through the College in 2003. A treasure trove of drawings and anatomical information, it represents his profound conviction of the importance of figurative art, “pulled from the anvil of studio work and from years of life drawing instruction.”

In her homage, Elisabeth Gordon Chandler, who founded the Lyme Academy, writes: “Deane Keller began teaching here when the fledgling Academy was only four years old. He helped shape the school, bringing to it his exceptional talents. He was a fine artist, a skilled draftsman, and exemplary teacher, adored by his students, and a dear friend. To the College his loss will be felt for years to come. To his close friends, of whom I am fortunate to be one, his loss is irreplaceable. But I know that his spirit will be with us forever.”

When Deane G. Keller and I met in 2004 at the Lyme Academy, he had, in his usual thoughtful way, prepared for me a folder of information about himself and his father. As a historian, I was enthralled. Today I revisited that folder while musing upon Deane’s legacy, and, as I re-read his extraordinary curriculum vitae, I cannot help but wonder: was this artist born late? Deane and I discussed this very notion more obliquely, as we both were deeply concerned about the dimunition of technical rigor and historical awareness in art education today. Would it not have been easier and more economically rewarding for Deane—with his superb draftsmanship, his anatomical expertise, and even his fascination for the East—to have lived 100 years ago?

Surely the answer is yes, yet I, like many others, am grateful it did not work out that way. By transmitting the values and skills of the academic tradition in the late 20th century—not only through teaching but also through his own art—Deane made an impact more distinctive, one might say even more provocative, than his forerunners had in the beaux-arts ateliers. His father’s example mattered deeply to Deane always, but one cannot help but be amazed at the range of formative educational experiences he pursued on his own in the 1960s and 70s. That hard-won, and ultimately successful, quest for training informed his own teaching, and it was clear that his students at Lyme appreciated every minute with him. It was particularly gratifying to enthuse with Deane over the remarkable anatomical drawings by George Bridgman that he saved from destruction. While admiring one of them, we reveled in the chain of of teacher-pupil relationships that can be traced from Jean-Léon Gérôme (whom the Dahesh continues to investigate) to Bridgman to Deane’s father to Deane to his own students. I now revel in the fact that those students working today will utilize, and then pass along what they learned from Deane. In this regard, he is not gone at all, and most certainly lived at just the right time.

Younger by ten years, I began to understand the force of Deane’s core attributes around the time of his graduation from prep school in 1958. The Taft School had been for Deane a multifaceted test, calling for energy, persistence, and humor. In later years he referred to its mandatory rhythms of living and studying as formative experiences. Yale was decisive because it nurtured Deane’s interests in philosophy and history and allowed him to give his own shape to the visual arts environment created and sustained by our parents.

Deane’s work in college, which included drawing and painting with Deane Keller, his father, suggested that his essential approach in life was going to be focused and all-out. This extended to athletics, as well. Deane was, in the opinion of the head of the gym, the strongest student in his class for his size and weight. In fact, at one point during college, he held the record for pushups. He was, after all, always concerned with the movement—or the possibility of movement—of the human form in space.

Teachers were central to Deane’s implementation of his vision. Early on, large classes taught by Vincent Scully and William L. MacDonald dealt with form as meaning in art and architecture. Later, and more directly, David K. Rubins, sculptor and longtime faculty member at the Herron School of Art in Indianapolis, facilitated Deane’s conception of the whole human figure. And Walker Hancock, author of the bronze Pennsylvania Railroad War Memorial in Philadelphia, and Wayne O. Southwick, Professor Emeritus of Orthopaedics at Yale, supported Deane through the example of their work and accomplishment.

Ultimately, Deane operated on his own but drew power from many sources of thought and action. He read T. E. Lawrence; studied George Bridgman; drew in Paris near Delacroix’s studio and in Rome on the Ponte degli Angeli; witnessed the broken figure of Ramses II, Shelley’s Ozymandias, in Thebes; tested the ancient footrace starting device in the stadium at Delphi; surveyed the houses of Thomas Eakins in Philadelphia and William Hekking on Monhegan. He worked through woodcut, tempera, landscape, still life, sculpture, portraiture, and always the figure. He sought to evaluate honestly his own performance. Deane’s work reflects all that he was, and is.